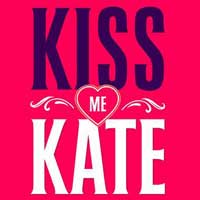 "...I don't easily arrive at the place that old musicals should never be produced; my view is that audiences are capable of separating the mores of the 1940s from those of the present day and contextualizing what they are seeing. But I am of the view that new productions of such shows have to have a plan to remediate some of the offense, such a judicious snipping or re-pacing of problematic lines and/or the development of more ambivalent readings, even if counter to the original 1948 intent. With shows like this, it's also not a bad idea to race through the book and put the focus on the singing and dancing."

"...The good news is that the cast delivers the musical numbers to showstopping effect; it is difficult to imagine all-hands-on-deck production numbers better than those that Kiss Me Kate pulls off."

"...Ultimately, this show belongs to Moniz, whose performance marks her return to the Chicago area after three years on tour with "Fun Home" and "Phantom of the Opera." Her Lilli fights the gender war on stage, the battlefield with which she's familiar. That's the source of her power and she exercises it well, with several well-placed kicks to Fred's posterior. What a homecoming it is."

"...Unfortunately, the very quality that makes Kiss Me, Kate great-its embarrassment of riches-is also a problem. The show just has so many elements to get right-serious scenes, comic scenes, rousing tunes, long, complicated dance numbers-and only so much time a production, especially an Equity production with a limited rehearsal schedule, can devote to preparing the show for opening."

"...Kiss Me Kate is a delightful iconic musical timeless in scope. Interestingly enough, Mariott Lincolnshire's production of Kiss Me Kate is being directed by first-timer Johanna Mackenzie Miller who twenty years ago made her acting debut under the same spotlight. She has reimagined this classic tale through a more modern perspective. She concentrates on Lilli's experience in a male-dominated role the story shifts and we see Lilli realize her worth as an artist and woman."

"...The show also includes some marvelous Cole Porter songs, such as "Another Op'nin, Another Show", "Wunderbar", "We Open In Venice", "Too Darn Hot" ( this number is divine as Jonathan Butler-Duplessis,, who is known for show stopping numbers,does it again) ,"From This Moment On" and of course "Kiss Me Kate". If you ask people about these songs they will say they know them, but if you ask them about the play, the only one they will know its origin is "Kiss Me Kate"."

"...And what about Cole Porter, that Indiana-born sophisticate with a wicked wit and a genius for wordplay and irresistible melodies? Lets just say some might consider him the American musical theaters counterpart of Shakespeare. Just listen to such songs as Why Cant You Behave?, So in Love, Where Is the Life That Late I Led, and you might even begin to hear the bards iambic pentameter rhythms."

"...This isn't a perfect production, but then this musical isn't a perfect vehicle. It's dated, but we can look beyond that. The happy ending seems to just happen without very much preparation or fanfare. Depending upon where you're sitting, Scott Davis' strange onstage/backstage scenic design makes it difficult to see what's going on. But the musical numbers, and the actors who perform them, are the reason to see this show. Ryan T. Nelson's spot-on Musical Direction, paired with Patti Garwood's full-sounding pit orchestra and Alex Sanchez's extraordinary choreography combine to make this show "Too Darn Hot!""

"...Helming that charge is Chicagoland favorite and Kiss Me Kate lead Susan Moniz as Lilli Vanessi/Kate. She does everything wellfrom strong and tender vocals to nuanced acting ranging from perfect comedic timing to rage. Her late show turning away from another possibly failed marriage to yet another misogynist and the song Im Ashamed That People Are So Simple (changed from the original Women Are So Simple) are poignant reminders that this is certainly not ones grandparents Kiss Me."

"...Go for this production's superb vocals, comedic moments and excellent dance numbers. But beware, the 1948 musical written by Bella and Samuel Spewack with music and lyrics by Cole Porter, is based on William Shakespeare's "The Taming of the Shrew.""

"...Under Millers direction, Moniz puts everything she has into both Kates taming and Lillis vindication (well, as much vindication as the late 40s found appropriate, anyway), showing these diametrically opposite outcomes through radically different approaches to both body and voice in order to make clear that life does not imitate art here. It might just be enough to help you to overcome the antifeminist discomfort of Shakespeares playMiller is certainly hoping it will bethough that is a decision for each audience member to make. For me, Ill say that this is about as strong a production of Kiss Me, Kate as you are ever likely to see, and if that is not enough to make it palatable for you, you should stay home."