In the Jungle of Cities Reviews 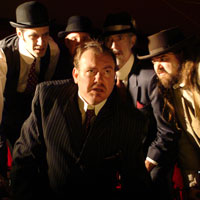 In the Jungle of Cities

"...But this Ka-Tet Theatre staging is fitfully brilliant. Tracy Otwell's stark, smoky scenic design creates a murky hell, and director Max Truax adds ingenious touches true to Brecht's aesthetic, including a new character, the Barker, who recites snippets of historic texts--most entertainingly, Jack Dempsey's description of a 1923 fight said to have inspired Brecht. And though Brecht didn't start collaborating with Kurt Weill until 1927, there's a Weillian song by Tom Waits."

"...Brecht described the play as an inexplicable wrestling match between two men: Schlink, a Malayan timber tycoon, and George Garga, a lowly library employee recently arrived from the sticks. For no good reason, Schlink picks a fight with the other man that eventually consumes them both and destroys Georges family. More than an allegory about the struggle between idealism and capitalism, the plays also a strange and fascinating study of sadomasochism, in which hate comes to seem not quite the opposite of love."

"...While not every theatre patron may appreciate Bertolt Brechts plays, he was a major influence on 20th Century theatre. In The Jungle of Cities is a rarely mounted work that is in fine hands with Ka-Tet Theatre under the smart direction of Max Truax. Every actor in Chicago needs to see this play; directors can learn much as how to stage a Brecht play. Those who enjoy a unique theatrical experience of the highest order will embrace and be impressed with the fluid, memorizing and totally intoxicating epic night at the theatre that is In The Jungle of Cities. I am continually impressed with Ka-Tet Theatres craft. This is one of the best show of the year!"

"...Jungle delivers a two-hour tapestry of venality in action, though much of the action is more symbolic or expressionistic than plausible or rational.  The cast, lurid in pancake and lit like fugitives in their own town, strike attitudes of menace amid outsized reactions, essential elements of Brechts anti-empathetic epic theater with its stylized distancing devices."

"...In the Jungle of Cities will certainly not be everyones cup of tea. In fact, I cant imagine many having the palette for it. But despite the lunacy of it all, the production succeeds thanks to some strong performances and adept direction."