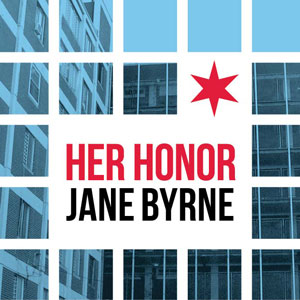 "...Christine Mary Dunford returns as Byrne. Sneaking cigarettes, nervously snapping her fingers next to her side as tension mounts all around her (in the first three months of 1981, 11 people were killed and 37 others shot at Cabrini, which provided one of the reasons she gave for moving in), Dunford's Byrne is both bluntly defiant and at sea. We see her trying to equivocate and negotiate her way through corrupt pols and bureaucrats like First Ward alderman Fred Roti and Chicago Housing Authority chair Charlie Swibel (both nimbly played by Raymond Fox, replacing Thomas J. Cox). For context, Roti was convicted on 11 criminal counts in 1990 and identified in a 1991 report by the U.S. Attorney General as a known member of La Cosa Nostra."

"...Brooks, who also directed this tight look at history on a wonderful set ( Yu Shibagaki) almost creates the atmosphere and the feeling that we are on Division just east of Halsted. The audience is placed on three sides overlooking the entryway, court of the building where she resided for three weeks. The walls of the "project" spin and become the interior of the apartment, and again her office on the 6th floor of City Hall, and even to the bedroom. The cast of players is small, but very powerful , playing several roles with great wigs (Megan Pirtle) and costume changes that are amazing. Costumes ( Mieka Van der Ploeg) look just like I remember for that period. Dunford truly looks as if Her Honor has come back to life for this production."

"...While Brooks' narrative casts the likes of Swibel, Brzeczek, policemen and mob-tied alderman Fred Roti in the harshest possible light, Byrne herself is more nuanced. Yes it was political theater, but aren't all political acts ultimately theater? At least Jane Byrne tried to change the narrative."

"...Ms. Brooks play is a great reminder of the important part Jane Byrne played in this citys history. The production is passionate and gripping, with its multiple urban characters all revolving around, and returning to, Mayor Byrne. This chapter in Chicagos history is told in a series of fragmented, chronological scenes, staged all over a sprawling, two-level, environmental scenic design by Yu Shibagaki. The production is mightily enhanced by Rasean Davonte Johnsons incredibly frenetic projections, along with Christine A. Binders atmospheric lighting and Christopher M. LaPortes palette of sound, that utilizes both recorded hits from the 80s and Michael Hueys original musical compositions.'

"...The play focuses on Byrne's dramatic action in 1981 to move into an apartment in Cabrini Green and stay there, she promises, until she finds solutions to the crime and violence. Her efforts include confronting First Ward Alderman Fred Roti (also played by Fox) to demand he use his influence to stop drug traffic, pushing Swibel to improve conditions in CHA properties, meeting with residents, and organizing an Easter party for children and families. (In fact, she lived there for just a few weeks and probably never spent a night there. Her husband, Jay McMullen, played by Frank Nall, is there with her.)"

"...Brooks, who also directs the play, describes it as a play that joins history to myth. It is not intended to be truly accurate even though some of it was based on interviews with people who lived through it. It is constructed as a collage-like series of scenes, some realistic and some (like those showing the relationship Byrne had with her dead husband) not so much."