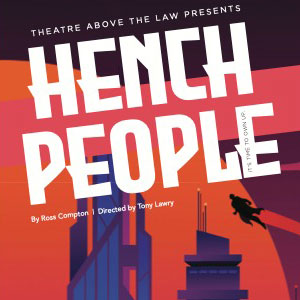 Theatre Above the Law at The Jarvis Square Theater

"...It was hard to believe that it was only a cast of three. Julie Rowley plays 3 roles and does it so believable that I fell for it, Julie has been in other theatres around Chicago including Second City Comedy Central and the Promethean Theatre. Her knack at comedy seemed so easy. Oona played by Stephanie Stockwell, came across as the perfect hero, and with an extensive background with Boho Theatre, Lifeline and Porchlight she turned this 70 min production to an enjoyable evening. The third link in the story is played by Travis Shanahan, the real mastermind to all the inventions that give this production the Flash Gordan feel to this show. Even thou the seats are a little uncomfortable, the show made up for it in so many ways. Director Tony Lawry did a great job with this brand-new world production."

"...Everyone knows about the super villain. Their face on every television screen in the city, or maybe projected from a blimp, threatening the city with destruction unless their demands are met. But what about the little people? The ones who make the death ray so deadly? The ones who antagonize the sharks in the pool under the trap door? And this spandex body suit with floor-length cape won't clean itself... Theatre Above the Law returns to live, in-person theatre with a show that explores the stories of those unsung anti-heroes: the henchpeople."