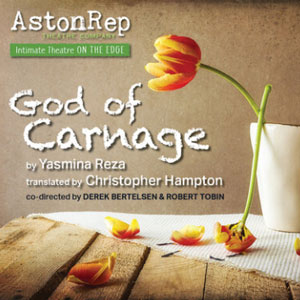 "...Mike Newquist and Erin Kathleen O'Brien as the Novaks and Mark Tacderas and Maggie Antonijevic as the Raleighs handle their characters' shifting alignments capably. But Reza's satiric point-that the discreet charm of the bourgeoisie is a fragile facade for our animal aggressions-seems quaintly obvious in today's angrily and sometimes violently divided world."

"...For fans of the theater, the return to live theater is definitely one of the milestones weve used to mark, if not the end of the pandemic, progress toward it certainly. I met a friend for dinner before the show, and then got a drink with her afterwards. On the walk to the bar, the first snow of the season was gently falling. You could not have scripted a more quintessential autumn evening in Chicago if you tried. We both noted how astonishingly normal an evening it was, if you squint past the masks and the vaccination cards. This is a roundabout way of saying the show was a lovely part of a lovely evening, and I encourage you to make this show part of an evening out on the town as well."

"...An aspect of excellence in Rezas play is the quick-paced and shifting dynamics among the four. At one point the fathers bond over the suggestion the boys might simply duke it out, horrifying the mothers. At another, high-powered lawyerly Alan Novak bristles at any wording choice in the statement that could infer legal liability. The mothers joust over giving the Raleighs say over how any punishment should be meted out. Even more vicious in these shifting sands of relationships are the squabbles within each couple."

"...Yes, this is a story of two couples fighting over an incident involving their children. But Reza's witty and topical script turns this into far more than parental squabbling. Eventually, we have every possible variation of conflict. Men vs. women, discussions of war and genocide, sexism, homophobia, and questions of why anyone would even have children. "My son's a savage," Alan admits. Later Michael says, "Children consume our lives and then destroy them." By the end, the parents have turned into children."

"...This sheer lack of kindness and tact forms the underlying problem in Yasmina Reza's God of Carnage, now playing at Edge Off Broadway in an Aston Rep Theatre Company production directed by Robert Tobin and Derek Bertelsen. Two couples meet for what they expect to be a calm, reasonable discussion about an altercation between their young boys that left one injured (or, in the incendiary phrasing of his mother, "disfigured"). They hope for a peaceful evening because they all agree, basically, about the particulars of the event. The father of the aggressor even describes his own son, who hit the other boy with a stick and broke some of his teeth, as a hooligan. The parents of the injured boy (at whose home this conversation takes place) even bring out espresso and cake for their "guests"-all so civilized."

"...The brilliance of this script, in this writers view, is the speed at with Rezas story makes and breaks alliances between spouses, genders, and others. Its a laugh-soaked whiplash all the way. If you have any inclination to be a referee, you will likely throw up your hands when you realize the impossibility of keeping score. This is team humaneveryone on the same team and everyone losing."