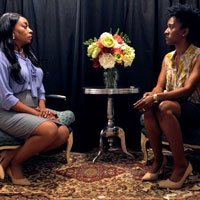 "...But Barnes, who is still finishing graduate school in playwriting, certainly is adept at conjuring a radicalized feeling of dread and pending calamity and collision; it as if she got an advance transcript of the Oprah interview and went from there, sympathetically imagining a journey far inside Meghan's head, even as she decided she had to blow everything up for own sanity, maybe too belatedly for her own good."

Around The Town Chicago- Not Recommended

"...At heart, "Duchess! Duchess! Duchess!" doesn't know what it wants to be: a real psychological drama, a part ghost/part horror story, a science fiction account about entering another dimension, or something just plain weird and disconnected. Sound design and original music by Pornchanok Kanchanabanca adds to the unreality of the plot with its haunting chords and bizarre sound effects. Was I watching a bad soap opera, or was this the playwright's shorthand for how people must feel when they are actively leaving their body? Was the horror on stage in the minds of the characters or actually taking place? The show introduces too many negative stereotypes, and I personally have issues with unnecessarily violent and unflattering portrayals of women. I just don't like seeing people reduced to their baser instincts."

"...It's hard to imagine a more prescient play than Vivian J.O. Barnes "Duchess! Duchess! Duchess!" playing at Steppenwolf and streaming through the end of August. Although written in 2018, the play appears spawned from the deep subconscious of the recent Oprah Winfrey interview with Meghan Markle and Prince Harry. Presented as a thirty-five-minute recorded play, the plot involves an incredibly intense conversation between a duchess and a soon-to-be duchess, with the former patiently outlining the true demands of protocol. These demands begin with the practical, like how a duchess is expected to sit (your rump barely touches the seat and all your weight is supported at the ankles). Very quickly, though, the conversation moves to the less-grounded, more absurd reality of living one's life in a very ornate fish bowl."

"...Duchess! is a conversation between the two women that skirts the race issue but never addresses it; it could have been a more substantive story if the playwright had confronted race and the role of women in such institutions. Instead the play is a morsel of entertainment."

"...Barnes, whose crisp dialogue provides two clear and understandable characters in this short play, chooses to leave one powerful door unopened. Both actresses are Black, and much of Markle's issues with the Firm and the paparazzi has had racial undertones, but Barnes ignores race entirely. It seems like a real opportunity missed. Still, Duchess! Duchess! Duchess!, with its prescient portrayals, shows clearly why Soon-To-Be could never possibly fit into the insular culture she has found herself caught up in. No matter how exciting it might seem to marry a Prince, life isn't a fairy tale."

"...Though only a bare 30 minutes long, the minimal physical action associated with a dramatic universe predicated on environmental inertia, not to mention the necessity of filming characters in separate sessions, mandates viewing Sydney Charles and Christine M. Cooper in extreme close-up for most of their onscreen time, intensifying our horror at witnessing the deterioration of a PTSD-racked Stepford Wife whose martyrdom to an envious public's fantasy of regal privilege will be remembered long after the reign of Elizabeth II has become as remote in our consciousness as that of her ancestral namesake."