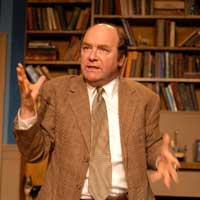 "...It's certainly a piece directed with integrity by Provision artistic director Tim Gregory and performed with the expected charm and smarts by Armacost. It has its quiet pleasures, especially for Lewis enthusiasts. And it assuredly delivers a warm, simple atmosphere -- thanks to set designer John Zuiker, it genuinely feels like you've wandered into Lewis' comforting Oxford study. But it still left me wanting a good deal more."

"...C.S. Lewis on Stage is an intoxicating intellectual and emotional adventure of enormous appeal. If one isn't familiar with Lewis' works, by the end of this show you'll want to read everything you can by this towering 20th century figure."

"...As portrayed by Bradley Armacost in a riveting production by Provision Theater Company, Lewis was a man with a lot to say and a great need to say it. Writer Tom Key provides a fine balance between Lewiss somewhat old-fashioned poetry, his clever advocacy of mere Christianity (Christianity stripped of political ideology), and his sometimes stodgy, sometimes spot-on satirical skewering of modernism and pre- and post-WWII British life."

"... Tom Keys 90-minute adaptation is no talking-heads exercise, however, but incorporates an abundance of ticklish stage business for our host ( an intrusive cat outside the door, a futile quest for tea and teacups ) , while John Zuikers scenic design surrounds Lewis with the cozy disorder we associate with Victorian decorphotographs, knick-knacks, weighty tomes for paging through or sitting uponas does Alaric Rokko Jans pensive music."

"...Gregory makes the most of his material, directing his one-man cast in a chummy, easeful performance. As Lewis, Armacost delivers what the script requires: an entertaining, cheerful and fully fleshed portrayal of a character whose edges have already been smoothed."

"...Brad Armacost delivers a complex and charmingly winning performance of the intellectual Lewis. I was impressed at the command and the complexity of the material that had Armacost moving from being Lewis to acting out several parts of Lewis poems and/or characters from his writings."