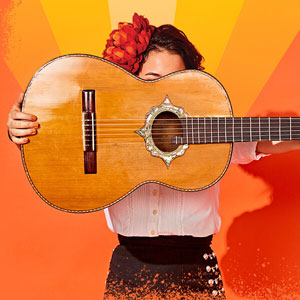 Average Rating based on 15 reviews

"...The other confounding issue here in director Henry Godinez's very lively production is that the music is dominated by an all-male mariachi band (Juan Díes, Víctor Pichardo, Zacbe Pichardo and Rodolfo "Rudy" Piñón of the group Sones de Mexico), often even underscoring the women as they develop their band and learn their instruments. It's certainly fun to hear this music but it flies in the face of the theme of the show. What needs to happen here is the male musicians need to play a supporting role and the focus should land instead on the band of women, who already sound great in this production. They'd surely sound even better if they had stronger character development and they were working with more musical material."

"...Sones de Mexico, the stellar Chicago-based, Grammy-nominated ensemble, serves as the play's anchor, as it expertly performs classics of the genre, which set the mood and propel the action. Aided by family friend Mino (an excellent Bobby Plasencia), Lucha and Boli, along with Isabel (a beatific Molly Hernandez), Gabby (Amanda Raquel Martínez, totally delightful) and Soyla (a scene-stealing Gloria Vivica Benavides), the women master their instruments and learn that mariachi demands "sacrifce and discipline" ... and above all, respect."

"...Director Henry Godinez's production benefits from winning performances by its actor/musicians, including members of the Chicago-based ensemble Sones de Mexico, who provide the musical accompaniment for the show presented as part of Destinos, The Chicago International Latino Theater Festival."

"...After the year and a half we've just had, it's hard to put yourself out there. But is there any other option, in life, love, or creative craft? The women of Las Coronelas, which is what Lucha and her compadres end up naming themselves, would suggest there is not. As the throngs of people dissipated after the performance, I stood in front of the theater, listening to the snippets of excited conversation amongst people who were just happy to be there. They created a cacophony in my brain, mixing with the snippets of mariachi I was still savoring. It felt good to be welcomed home, and then it felt good to leave, knowing I'd be back."

"...Jose Cruz Gonzales' deceptively simple story is layered deep with hidden metaphor, even down to the characters' names ("Lucha" means "fighter"), but the ensemble selected by director Henry Godinez for this joint Dallas Theatre Center/Goodman Theatre production deftly navigates every twist and turn in a script rich with cultural history and brilliant spectacle."

"...Are you looking for a great show that is funny, heartwarming, and features great music, specifically mariachi? Then look no further than American Mariachi by Jose Cruz Gonzalez, directed by Goodman Resident Artistic Associate Henry Godinez, and presented as part of Chicago Latino Theater Alliance's Destinos."

"...From beginning to end, this 95-minute play will inspire and delight your soul with its rich cultural music and love, where tradition and family come first, but a daughters' love rings supreme. We talked about Broadway plays on our weekly radio show, Let's Stay Together Talk, and American Mariachi should be headed in that direction."

"...This is a story filled with emotion. From start to finish, no matter where you came from, you are drawn into the story and feel the feelings of the people. You may even have a memory come back to you of some event in your life that draws a parallel. I can tell you that you will laugh, you will smile, you may find a tear in the eye ( of happiness), but of great importance, you will leave the Goodman Theatre feeling elated!"

"...Predictable perhaps, but that path is filled with matters of love and heartbreak, of the consequences of machismo pride, of familia and the melancholy character of memorythemes echoed in the mariachi music that fills the show. For as topnotch as the ensemble cast is under the direction of Henry Godinez, mariachi is the star, performed here by Chicagos legendary Sones de México Ensemble. For American audiences whose exposure to mariachi can be burdened with stereotypes, the exposition that explains some of the musics tradition and technique is compelling."

"...Jose Cruz Gonzalez's powerful message of encouragement for bringing your dreams to life is told through a 95-minute story of love, empowerment and family-all seasoned with a pride in one's heritage. It's a must-see celebration of life that will bring a smile to your lips, a tear to your eye and joy to your heart."

"...Not surprising, at the heart of the play is the music! Throughout the show, the four member band (Juan Dies, Victor Pichardo-music director, Zacbe Pichardo, Rodolfo Rudy Pinon) punctate every scene with their sudden appearance. Their ongoing serenades are met with joy and audible excitement from the audience. (I happened to be in a section where attendees have forgotten live theatre protocols. Although their ongoing delight at the bands sudden appearance was infectious, their play commentary was just plain annoying.) And the lady Mariachi Band (Gloria Vivica Benavides, Lucy Godínez, Molly Hernández, Amanda Raquel Martinez, Tiffany Solano) crushed it. They were terrific! They amusingly pretend to be disjointed and then thrill in harmonious enchantment!"

"...Henry Godinez directs and Victor Pichardo music directs the script by Jose Cruz Gonzalez, which follows Lucha (vibrant Tiffany Solano) as she cares for her mother Amalia (Gigi Cervantes) while she slips into dementia. Her husband Federico (Ricardo Gutierrez) is mostly gone, touring with his mariachi band, and holding a grudge against his former best friend, music store owner Mino (Bobby Plasencia)."

"...This is a show full of joy and heart, a celebration of mariachi music, the joys and pain of family, and the often difficult journeys involved in any era of change. Music Director Victor Pichardo and the wonderful musicians who comprise Federico's band enliven Linda Buchanan's set every time they start playing, and Maria-Cristina Fuste's lighting is lovely, especially when it helps to take us into Amalia's mind. Danielle Nieves' costumes are nothing short of spectacular, as well."

"...By the end of the play, we share a sense of pride with the women of the mariachi band, tying in the reality of how this co-production with Dallas Theater Center was once shut down, but persevered to fulfill its dream of performance. Like Las Coronelas, these artists faced insurmountable challenges in order to restore life to their theatrical family. Just as the waves of the river changed Amalia's life forever, washing away a loved one from her life, so too do the waves of mariachi music restore and refresh not only that of Amalia's memories but the hearts of the audiences of Goodman Theatre's "American Mariachi.""

"...American Mariachi may not appeal to theatergoers seeking fresh insights into human nature. But a heartfelt sweetness permeates every moment of this musical tribute - co-produced by Goodman Theatre and Dallas Theater Center in association with Chicago Latino Theater Alliance - and that is apt to please all ears."