A Recipe for Disaster Reviews 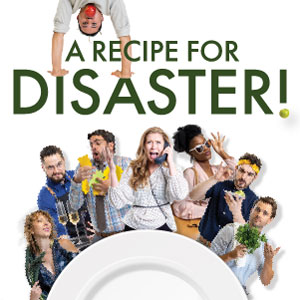 A Recipe for Disaster

"...But what you don't really feel, and what this show ideally needs, is a normative baseline, the sense that this is a real restaurant keeping the lid on panic until events overwhelm. That was the key to "Fawlty Towers," of course, in that John Cleese's Basil was always fine until he lost his cool and Connie Booth's Polly remained calm at all times. That's the character-type, or maybe the performance, missing here. It's a tricky space so the temptation surely is to try and reach everyone with every gag. But veracity has to stay in the kitchen. Farce needs truths. And details."

"...With its exaggerated, ridiculous and absurd situations, comedic farce can be an acquired taste and "A Recipe for Disaster" is no different. So, if you're looking for a relaxing evening of theater this may not fit the bill. This is nonstop, hilarious bread and circus hijinks dialed up to 11."

"...With subplots unfolding all around, the sensation of this piece is surely not unlike a kitchen in the weeds-yet the dialogue is silly enough that the risk of missing anything crucial to the plot is low, and the best value can be gotten by observing what entertainment is nearest to hand. Most fun are the silent antics imparted by a gymnastic Trinidad, whose acrobatics are often a secret show amidst all the shouting. Conceptually, although the play is described as immersive, once seated in the dining room, the audience experience is about as confined as usual-though this doesn't matter much from the standpoint of a fun night out with a flight of fancy food."

Around The Town Chicago- Somewhat Recommended

"...Iggy ( Alex Morales) and Jude ( Ben Page) work well together and are able to pull off most of their slapstick :stuff". Much is held together by Shelley ( Emma Jo Boyden) who is the manager that holds all the pieces together. Boris ( Ian Maryfield) is the new worker , but as it turns out, he is not what he seems to be. Clyde ( Ryan Reilly) as the inspector is everywhere and his character is as well. Is he who he claims to be or who he told Kiki ( Carley Cornelius) and Loreen ( Kierra Bunch)."

"...It's a lot to pack into a ninety-minute or so show without an intermission and it mostly succeeds, with a cast that feels "real" in their roles-no doubt a few of them have worked in hospitality at some point, as so many actors do. The pace is brisk, almost frantic, with sometimes as many as three conversations going on around the restaurant, creating overlapping dialogue that really worked. After all, in a real restaurant, we have to make eavesdropping choices, too, and the plot here is never confused by this technique."

"...Following the brilliant success of their soap opera-like comedy, Southern Gothic, Windy City Playhouse has created another entertaining immersive farce for Chicagoland audiences. As in plays of this kind, the actual stage is missing and the audience is seated within the performance itself. Patrons are completely surrounded by the characters and the action of the play, and the lines of reality and fiction become blurred. In Director David H. Bells production, theres an element of controlled chaos that can be a bit unsettling. But its a three ring circus that features farce and food in a play thatll leave audiences stuffed and satisfied."

"...Although A RECIPE FOR DISASTER is amusing, it's missing some substance. Despite the best efforts of the cast, the predictable story isn't engaging. The theatre only seats thirty guests. Intimacy and a connection is lost when action and conversations take place across the wide and narrow space. The play's conclusion is also lost on the attendees. It's lackluster and confusing. Even after the curtain call, guests continue to sit waiting in anticipation of something else happening for the story to more formally conclude."

"...This show is a fabulous multi-sensory night of entertainment. It is also a humorous peek into the inner world of a field that has been hard hit by the pandemic so there is an implicit edge to this plot. So many of my favorite chef-owned spots did not survive the era of curbside pick-up; fine dining does not always translate to carry out. It seemed revelatory to be back in the theater and back in a dining establishment again and the triumph of the dessert (a chocolate avocado miracle) was, I hope, a sign of better days."

"...A Recipe For Disaster may not receive Michelin stars, but it is a great time. Director David H. Bell uses every inch of the space (even fully or partially hidden bits of the set like the walk-in refrigerator, the storeroom, and the restrooms) to stage the silly moments. Though patrons are allowed to walk around to better check out the sometimes overlapping or simultaneous scenes, no one did, and it truly isnt necessary. Stay at your table: youll enjoy the food more easily and you wont miss anything critical."

"...Regular Chicago theater-goers who look to Windy City Playhouse for life-memorable theater gems in the immersive theater style, like this writer, should lower expectations. Is this a good match-script, Loop location, advert of our city's fine dining -for the tourist droves we hope will be returning soon? You betcha! In this writer's view, Windy City Playhouse does us proud."